If you are in crisis, call the toll-free National Suicide Prevention Lifeline at 1-800-273-TALK (8255), available 24 hours a day, 7 days a week. The service is available to anyone. All calls are confidential. https://www.suicidepreventionlifeline.org/.

Why American Teens Are So Sad

Four forces are propelling the rising rates of depression among young people.

The United States is experiencing an extreme teenage mental-health crisis. From 2009 to 2021, the share of American high-school students who say they feel “persistent feelings of sadness or hopelessness” rose from 26 percent to 44 percent, according to a new CDC study. This is the highest level of teenage sadness ever recorded.

The government survey of almost 8,000 high-school students, which was conducted in the first six months of 2021, found a great deal of variation in mental health among different groups. More than one in four girls reported that they had seriously contemplated attempting suicide during the pandemic, which was twice the rate of boys. Nearly half of LGBTQ teens said they had contemplated suicide during the pandemic, compared with 14 percent of their heterosexual peers. Sadness among white teens seems to be rising faster than among other groups. 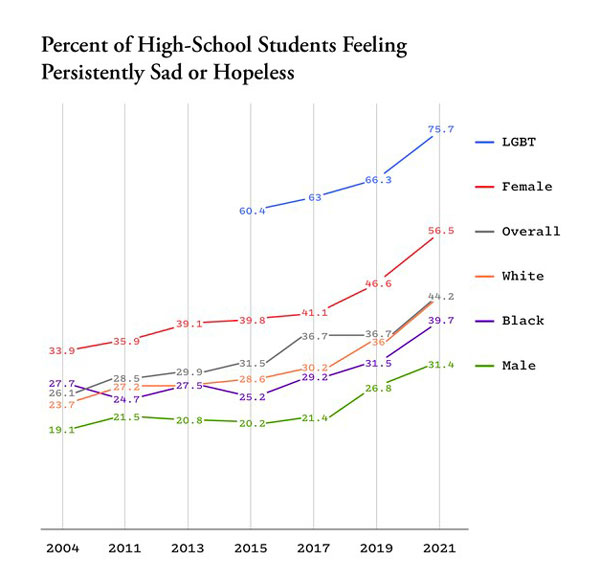 Credit: Derek Thompson, The Atlantic; data from the CDC.

But the big picture is the same across all categories: Almost every measure of mental health is getting worse, for every teenage demographic, and it’s happening all across the country. Since 2009, sadness and hopelessness have increased for every race; for straight teens and gay teens; for teens who say they’ve never had sex and for those who say they’ve had sex with males and/or females; for students in each year of high school; and for teens in all 50 states and the District of Columbia.

So why is this happening?

I want to propose several answers to that question, along with one meta-explanation that ties them together. But before I start with that, I want to squash a few tempting fallacies.

The first fallacy is that we can chalk this all up to teens behaving badly. In fact, lots of self-reported teen behaviors are moving in a positive direction. Since the 1990s, drinking-and-driving is down almost 50 percent. School fights are down 50 percent. Sex before 13 is down more than 70 percent. School bullying is down. And LGBTQ acceptance is up.

The second fallacy is that teens have always been moody, and sadness looks like it is rising only because people are more willing to talk about it. Objective measures of anxiety and depression—such as eating disorders, self-harming behavior, and teen suicides—are sharply up over the past decade. “Across the country we have witnessed dramatic increases in Emergency Department visits for all mental health emergencies including suspected suicide attempts,” the American Academy of Pediatrics said in October. Today’s teenagers are more comfortable talking about mental health, but rising youth sadness is no illusion.

The third fallacy is that today’s mental-health crisis was principally caused by the pandemic and an overreaction to COVID. “Rising teenage sadness isn’t a new trend, but rather the acceleration and broadening of a trend that clearly started before the pandemic,” Laurence Steinberg, a psychologist at Temple University, told me. But he added: “We shouldn’t ignore the pandemic, either. The fact that COVID seems to have made teen mental health worse offers clues about what’s really driving the rise in sadness.”

Five years ago, the psychologist Jean Twenge wrote an influential and controversial feature in The Atlantic titled “Have Smartphones Destroyed a Generation?” based on her book iGen. Around 2012, Twenge wrote, she had noticed that teen sadness and anxiety began to steadily rise in the U.S. and other rich developed countries. She looked for explanations and realized that 2012 was precisely when the share of Americans who owned a smartphone surpassed 50 percent and mobile social-media use spiked.

In the past few years, scientists have disputed the idea that social-media use itself makes teenagers miserable. “There’s been absolutely hundreds of [social-media and mental-health] studies, almost all showing pretty small effects,” Jeff Hancock, a behavioral psychologist at Stanford University who has conducted a meta-analysis of 226 such studies, told The New York Times recently.

But I think Twenge’s strongest point is misunderstood. Social media isn’t like rat poison, which is toxic to almost everyone. It’s more like alcohol: a mildly addictive substance that can enhance social situations but can also lead to dependency and depression among a minority of users.

This is very close to the conclusion reached by none other than Instagram. The company’s internal research from 2020 found that, while most users had a positive relationship with the app, one-third of teen girls said “Instagram made them feel worse,” even though these girls “feel unable to stop themselves” from logging on. And if you don’t believe a company owned by Facebook, believe a big new study from Cambridge University, in which researchers looked at 84,000 people of all ages and found that social media was strongly associated with worse mental health during certain sensitive life periods, including for girls ages 11 to 13.

Why would social media affect teenage mental health in this way? One explanation is that teenagers (and teenage girls in particular) are uniquely sensitive to the judgment of friends, teachers, and the digital crowd. As I’ve written, social media seems to hijack this keen peer sensitivity and drive obsessive thinking about body image and popularity. The problem isn’t just that social media fuels anxiety but also that—as we’ll see—it makes it harder for today’s young people to cope with the pressures of growing up.

Both Steinberg and Twenge stress that the biggest problem with social media might be not social media itself, but rather the activities that it replaces.

“I tell parents all the time that if Instagram is merely displacing TV, I’m not concerned about it,” Steinberg told me. But today’s teens spend more than five hours daily on social media, and that habit seems to be displacing quite a lot of beneficial activity. The share of high-school students who got eight or more hours of sleep declined 30 percent from 2007 to 2019. Compared with their counterparts in the 2000s, today’s teens are less likely to go out with their friends, get their driver’s license, or play youth sports.

The pandemic and the closure of schools likely exacerbated teen loneliness and sadness. A 2020 survey from Harvard’s Graduate School of Education found that loneliness spiked in the first year of the pandemic for everyone, but it rose most significantly for young people. “It’s well established that what protects teens from stress is close social relationships,” Steinberg said. “When kids can’t go to school to see their friends and peers and mentors, that social isolation could lead to sadness and depression, particularly for those predisposed to feeling sad or depressed.”

3. The World Is Stressful—and There Is More News About the World’s Stressors

Lisa Damour, a clinical psychologist and author, told me that no single factor can account for the rise of teenage sadness. But she believes a part of the answer is that the world has become more stressful. Or, at least, teenagers’ perception of the world seems to be causing them more stress.

“In the last decade teenagers have become increasingly stressed by concerns about gun violence, climate change, and the political environment,” she wrote in an email. “Increased stress among young people is
linked to increasing levels of sadness. Girls, more than boys, are socialized to internalize distress, meaning that they tend to collapse in on themselves by becoming depressed or anxious.”

Fears about finances, climate change, and viral pandemics are smashing into local concerns about social approval and setting oneself up for success. “I think of it as a pile-on effect,” Steinberg said. “We’re coming out of the pandemic, and then suddenly Russia goes to war. Every day, it feels like there’s something else. It creates a very gloomy narrative about the world.”

This sense of doom doesn’t just come from teenagers. It comes from us, the news media, and from the social-media channels through which our work is distributed. News sources have never been more abundant, or more accessible. But journalism also has a famous bad-news bias, which flows from an unfortunate but accurate understanding that negativity generally gets more attention. When we plug our brain into a news feed, we are usually choosing to deluge ourselves with negative representations of reality. A well-known 2019 experiment randomly forced people to stop using Facebook for four weeks before a midterm election. The study found that those who logged off spent more time hanging out with family and friends, consistent with the idea that social-media use displaces pro-social behaviors. It also found that deactivating Facebook “reduced factual news knowledge” while “increasing subjective well-being.” We cannot rule out the possibility that teens are sad about the world, not only because the world contains sadness, but also because young people have 24/7 access to sites that are constantly telling them they should be depressed about it.

No comments to show.